Our Bridge, the Sydney Harbour Bridge, under construction in 1930.

"The Sydney Harbour Bridge construction ... took 1400 men eight years to build at a cost of £4.2 million. Six million hand driven rivets and 53,000 tonnes of steel were used in its construction. It now carries eight traffic lanes and two rail lines, one in each direction, but at the time of its construction the two eastern lanes were tram tracks. They were converted to road traffic when Sydney closed down its tram system in the 1950s." (Culture and Recreation.gov.au)

The main names associated with the Bridge are Bradfield, Lang and de Groot. Bradfield was the architect and the road across the Bridge, the Bradfield Highway, is named after him. I'll talk more about him later.

So there they all are on opening day. It's a sunny Autumn day, right in the middle of the Great Depression. The people are hungry, angry and frightened. They don't know it yet but that great Australian racehorse Phar Lap will soon be dead and they're going to need another icon to replace him. NSW Premier Jack Lang, NSW Governor Sir Phillip Game are all there, along with all these military blokes on horseback in their shiniest uniforms and hundreds of thousands of Sydneysiders.

Lang steps forward with the scissors to cut the ribbon and declare the Bridge officially open. But before he can cut it this wanker de Groot pushes forward on his horse and slashes the ribbon with his sword, declaring the Bridge open "in the name of the decent and respectable people of New South Wales". By "decent and respectable people" he means his fellow fascists.

Lang is miffed, obviously, but the ribbon is sticky-taped back together and Lang gives it a snip for the cameras and declares it officially open. Then it's on for young and old. The Sydneysiders pour across the Bridge in their thousands and de Groot is hauled off to the copshop where they try to charge him with playing silly-buggers and going armed in public but, due to his being entitled to carry a sword whilst in military uniform at official events, they can only fine him £5 and tell him he's a naughty boy.

Would I rather de Groot hadn't stuck his oar in? Fuck no. Nuffing like a nice bit of soap opera and an arrest to liven up the proceedings and it didn't do the Coathanger any lasting harm.

The Great Depression - a time of massive unemployment, poverty and fear throughout much of the world.

Pre-Bridge traffic - "1890 ... Vehicular access to the north shore was undertaken with a series of smaller bridges located further westwards in the harbour, but this was insufficient for the traffic in the Sydney/North Sydney area."

Potted history and some photos at the Bridge Climb site.

Photos and stuff at the Australian National Maritime Museum at Darling Harbour.

Rejected Bridge plans and more Bridge photos at the Museum of Sydney. They also have the Bridge in lego.

Stories about the building and opening of the bridge with construction photos from the earlier stages as well.

Great drawing on Kilts to Kangaroos showing the stages of construction. The author workeed on the Bridge and walked it the day it opened.

The City of Sydney site has some recent photos of the Bridge as well ones from the opening and construction.

Beautiful close-ups of the construction on someone's personal site. Scroll down for the photos, Bridge stats and links.

The National Library of Australia will flog you a Bridge construction photo. 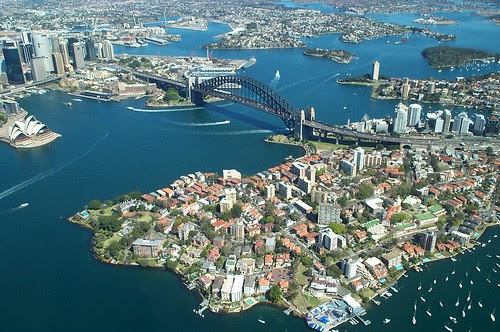 "Sydney Harbour shot taken from the air. Bridge in the center of the shot with the Opera house to the side. I took this photo myself during a helicopter joy flight. Rodney Haywood." (Wiki)


I'll be walking across the Coathanger this Sunday on its 75th birthday. I got in quick and got a place. The Bridge will be closed to traffic and thousands of Sydneysiders, a couple of Woy Woyans and assorted out-of-towners will be wandering across it. The water below will be chockers with boats and gawkers and the streets of Sydney will be likewise chockers. I'll post my photos of the walk on Monday.

Road closures and public transport on the Walk day.

brief rundown on the Sydney Morning Herald site. The registration mentioned in that article is closed. All the places for walking the Bridge are gone.

Yep, you can put your Bridge story in the comments. The more the merrier.

Olive Riley, late of Woy Woy and formerly the world's oldest blogger, was there and walked the Bridge on its opening day in 1932. Read about it on All About Olive.
Posted by Spike at 3:08 pm 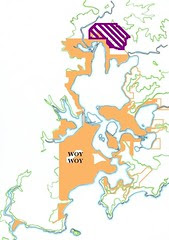